Celebrity Actors will be appearing as God in Monty Python’s Spamalot, this summer at The Playhouse Theatre to raise money for charity.

Hugh Bonneville, Barbara Windsor, Larry Lamb, Bradley Walsh, Simon Callow and Christopher Biggins will all be appearing this summer at The Playhouse Theatre to raise money for charity.

‘The Summer of Spamalot Charity Gods’ has been created to raise-a-lot of shillings for charity. Bradley Walsh is a patron of The Make A Wish Foundation and will be supporting them for his week. Several other charities including Headley Court Rehabilitation Centre, Great Ormond Street Hospital, Scene & Heard, Stage For Age and Keats Community Library will also benifit which are supported by the other actors who will be playing God.

The actors took time out of their busy schedule to film the part of God, which will be shown during each performance of Spamalot, with their portrayal running for a week at a time from 15th July onwards.

Hugh Bonneville’s performance as God kicks off the season, with a special night to celebrate the start of his week on Monday 15th July from 8pm. Bradley Walsh starts from Monday 22nd July, Larry Lamb from Monday 29th July, Barbara Windsor will then be at the theatre on Monday 5th August for her first night as God and Simon Callow will be in the audience on Monday 12th August to mark the start of his week as God. Finally Christopher Biggins starts from Monday 19th August.

The role of God is normally played by Python legend Eric Idle, and features in Spamalot when King Arthur and the Knights of The Round Table are given their quest to find The Holy Grail.

Sir Howard Panter (says he’s a real Knight! as if), Producer of Spamalot for Ambassador Theatre Group, said; “It is a wonderful opportunity to be able to bring friends of the show in to the role of God in this way, so that we can help such deserving causes while making audiences laugh at the same time.”

Downton Abbey star, Hugh Bonneville, will kick off the ‘Summer of Spamalot Gods’ on 15th July and he said: “I wanted to play God in Spamalot in order to support Scene & Heard, a North London charity, which gives local young people living in challenging circumstances the opportunity to work with arts professionals and create theatre scripted entirely by the children. I’m grateful to the producers of Spamalot for this novel way of bringing attention to Scene & Heard’s inspirational work. I’m also delighted to be involved with the show because an ancestor on my mother’s side was in fact one of the Knights who say Ni.” 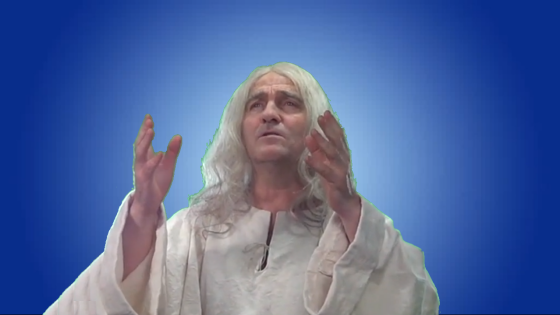 Legendary British actress, Barbara Windsor, who plays Spamalot’s first female God, said; “I wanted to play God in Spamalot because having been 4ft 10.5 inches tall (four feet, ten and a half inches) all my life, this would be the first and only time people would look up to me…..”.

Describing his portrayal as God in Spamalot, stage and screen actor, Simon Callow said; “I wanted to play God because it’s such a challenging role for a mere mortal. Spamalot is a work of genius and God is the climax. So it was irresistible. The charity to whom I’ve donated my fee is the Keats Grove Library, scandalously closed by the Local Authority and re-opened by a group of local people headed by my friend, the wonderful actor Lee Montague. I used to live round the corner as a young actor and used the library all the time. Don’t know what I would have done without it.”